skip to main | skip to sidebar

We are pleased to announce that the 30th anniversary reissue of the Warren Winters Band "Crossbar Hotel" vinyl LP record will be released by Sophomore Lounge Records on April 5th, 2019. 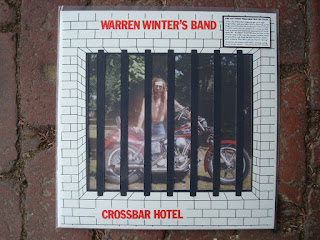 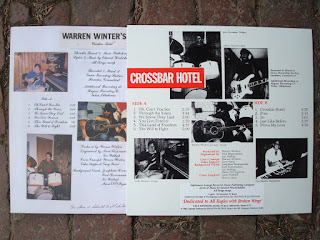 Under the pseudonym of Warren Winters, Edward Winterhalder formed the Warren Winters Band in the 1980s after fronting the Connecticut Dust Band during the late 1970s and early 1980s. Playing guitar and singing lead vocals, he utilized a group of studio musicians and his childhood friend Kurt Newman (drums) to record the "As I Was" debut album in 1984 on the Shovster Records label. In 1988, the "Crossbar Hotel" album was recorded at Grace Recording Studios in Connecticut with Warren Winters (guitar & lead vocals), Andy Rutman (guitar), Kurt Newman (drums), Lou Sabetta (keyboards) and Mario Figueroa (bass). On both albums, the song writing credits noted that all songs were written by Edward Winterhalder.


In 1995, "The Best Of Warren Winters" CD was mastered and produced by Chris Westerman of Blackwater Sound in New Hampshire. Along with hit songs from the "As I Was" and "Crossbar Hotel" albums, the compilation featured a few songs from his Connecticut Dust Band days and some unreleased tracks from studio sessions. While the music of the Warren Winters Band was once described as being somewhere between rock n' roll and progressive country, a 2011 article in France compared the Warren Winters Band sound to Acey Stone, Circuit Rider and Justen O'Brien.
Posted by Dara Taylor at 10:25 PM

For those of you who miss Edward Winterhalder's YouTube channel, the 25+ hours of content that was there can now be found on his DailyMotion channel, where you can view more than 165+ TV clips, movie clips, TV news clips, movies, and videos about motorcycle clubs, outlaw bikers, and the biker culture from 1940 to 2019: 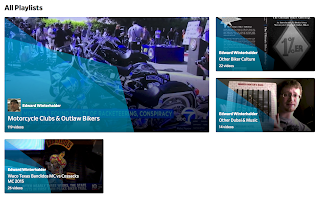 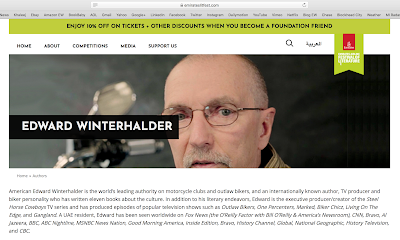 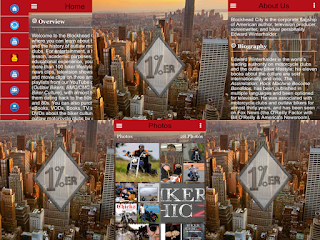 A television series about the positive aspects of the biker community in Abu Dhabi and Dubai. 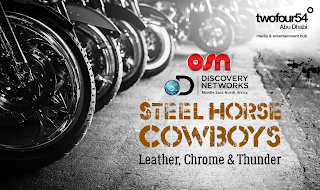 For those of you who miss our YouTube channel (which was recently terminated by YouTube for no reason), the content that was posted there can now be found on our new channel at DailyMotion. More than 20 hours of content (videos, movies, TV shows, TV clips, movie clips, and TV news clips about motorcycle clubs and the outlaw biker culture from the 50s, 60s, 70s, 80s to 2018) has been uploaded and is now available to view. Just like YouTube, you can follow the channel to receive notifications for future content. 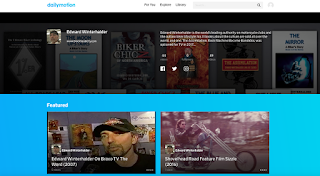 We regret to inform you that our YouTube channel (formerly seen at https://www.youtube.com/edwardwinterhalder), with more than 150 movie clips, movies, TV clips, TV shows, TV news clips, and videos about outlaw bikers and motorcycle clubs, was terminated without cause on January 2, 2018. The official notice from YouTube stated:

Although we have never used the channel to send spam, or to run a scam, or to display commercially deceptive content, multiple appeals to YouTube in the last few days have fallen on deaf ears.

Our YouTube channel contained the largest library of cinematic content about outlaw bikers and motorcycle clubs (from the 1950s to 2017) in the world; it was in existence for 8+ years, and had more than 5,000,000 views and 6,300 subscribers.

More than likely, the channel termination was due to a recent YouTube policy change which introduced a new algorithm to the video sharing platform that mandates only appropriate content be eligible for monetization in the future. Since then, YouTube’s new monetization policy has negatively impacted practically every content creator using the site.

“New safeguards” announced by YouTube in 2017 were designed to demonetize content related to or discussing “tragedy and conflict”, as well as “sensitive social issues”. Since outlaw bikers and motorcycle clubs are considered to be sensitive social issues in this day and age, it doesn’t take a rocket scientist to read between the lines.
Posted by Dara Taylor at 1:02 AM

In 1080p filmed from a camera on a tripod, a 7 minute version of the Burj Khalifa New Years Eve LED light show that was seen on January 1, 2018 in downtown Dubai:


https://youtu.be/zuppouoFtWI
Posted by Dara Taylor at 2:26 AM

5,000,000 views of the 130+ motorcycle club and biker lifestyle videos, TV clips, TV shows, movies, and movie clips on my YouTube channel. 1,000,000 views in the last 45 days. Don't miss out; subscribe now by clicking on this link: https://www.youtube.com/edwardwinterhalder

4,000,000 views of the 120+ motorcycle club and biker lifestyle videos, TV clips, TV shows, movies and movie clips on our YouTube channel. Don't miss out; subscribe now by clicking on this link:

The new version of the free Blockhead City mobile device app is now available on Amazon, Android & Apple IOS devices worldwide. On the app you can watch more than 100 biker lifestyle videos, TV news clips, television shows, movies, and movie clips on three amazing playlists from our YouTube channel (Outlaw Bikers, BMC/CMC Waco, or Biker Culture), with almost twenty of them dating back to the 50s, 60s, 70s and 80s. Download it here: www.blockheadcity.com/apps.html 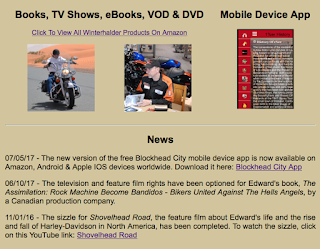 To learn about biker culture and the history of outlaw motorcycle clubs, you can now download the free Blockhead City mobile device app from the Google Play Store (Android version) worldwide. For entertainment, a history lesson, academic purposes, or an educational experience, you can watch more than 100 biker lifestyle videos, TV news clips, television shows, movies, and movie clips on three amazing playlists from our YouTube channel (Outlaw Bikers, BMC/CMC Waco, or Biker Culture), with almost twenty of them dating back to the 50s, 60s, 70s and 80s. You can also purchase eBooks, VODs, Books, TV shows, and DVDs about the biker culture and outlaw motorcycle clubs by going to our E-Book and E-Commerce stores. 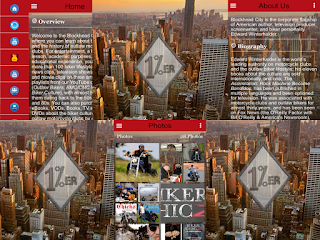 A new TV series about the positive aspects of the biker community in the UAE is now officially in development with Canada's Our House Media and Discovery Channel/OSN! 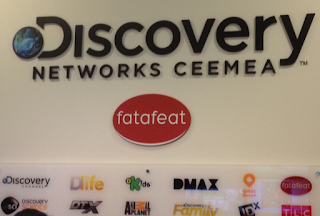 3,500,000 views of the 115+ motorcycle club and biker lifestyle videos, TV clips, TV shows, movies, and movie clips on our YouTube channel. Don't miss out; subscribe now by clicking on this link:

If you have access to Amazon Prime (65,000,000 subscribers) in America, Germany, UK and Japan, search for "Edward Winterhalder" to watch 5 of our 9 television clips, trailers, sizzles, and shows for free. 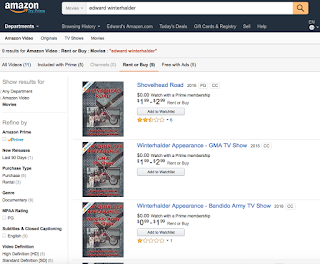 The Blue And Silver Shark: A Biker's Story (December 2015) 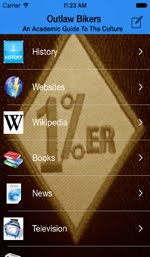 Biker Chicz: The Attraction Of Women To Motorcycles And Outlaw Bikers (July 2014) 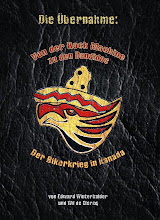 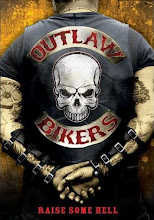 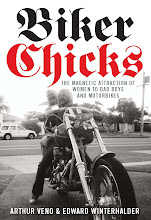 All Roads Lead To Sturgis: A Biker's Story (February 2009) 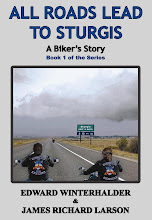 The Back Cover Image For The Biker's Story Series 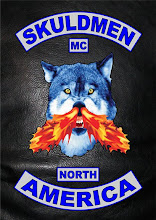 Living on the Edge: Riding with the Vietnam Vets Motorcycle Club in Pennsylvania (December 2007) 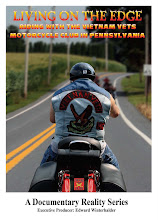 Edward and Jim May 08 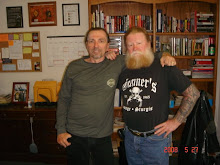 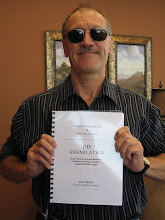 Wil De Clercq with the Manuscript for The Assimilation Sep 07